The pursuit of humanized birth delivery has increased in Brazil, a country which still holds records in C-sections. Here, for every 10 deliveries, 8.5 are surgical, while the WHO (World Health Organization), which previously reported that there is an “epidemic” of C-sections throughout the world, recommends 1.5. Despite the fact that the pursuit for natural and quality deliveries is increasing, this does not reflect in the absolute reality of the women who live in underprivileged areas, who often suffer from obstetric violence and who are directly affected by the limited access to information about their rights.

Wishing to change this reality, the Rio-born social worker Camila Habdallah has dedicated herself to studying women´s rights and has become a Doula and worked as a volunteer in one of the maternity units. She wanted to go one step further and impart her knowledge into communities. In order to go ahead with the idea, Camila took part in the social leadership education program from Active Citizens. It is a program offered by way of a partnership between the Recode NGO and the British Council, an Organization from the United Kingdom which aims at cultural relationships and educational opportunities. The goal is to bring together those who are interested in sharing ideas and developing skills so as to become agents of change within communities. At the end of the program, students present the projects they have developed throughout the classes.

Her project, The Conscious Maternity, was shortlisted and, on top of that, it was awarded with financial backing to enable the project to be put into practice. Camila will travel to the United Kingdom, by way of an invitation by the British Council, so as to pursue a global education with other protagonists of social change who come from various other countries. “I guess information is the basis to generate significant changes in society, so, I regard the program Active Citizens as a turning point in my professional and personal trajectory” she said. “The project is an opportunity to broaden my horizons through contact with other social projects and with citizens who are interested in making a difference in this world.”

The NGO Educap, one of our partners, shortlisted the class she studied. It is located in the Complexo do Alemao community, according to Habdallah, the choice to offer the course at the community contributed to make the whole experience more fulfilling. “Participating in this program at the Complexo do Alemao community led me to think over the importance of being connected with people and discussing a society with a wider sense of community, one which collectively searches and finds solutions to common problems.” 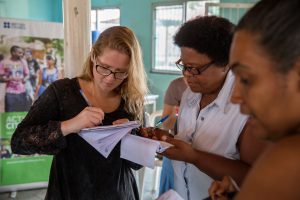 The idea of The Conscious Maternity is that pregnant women take part in educational workshops with multidisciplinary teams and receive follow up care by doulas. At the end of their participation, each pregnant woman with an attendance level of 75% in the activities will receive a digital photo book and a booklet on humanized delivery which has been elaborated by the participants in the project to be distributed within the community.

Has this sparked your interest? Are you keen to make a difference within communities? Follow our blog for more inspiring stories and course opportunities which can enable you to transform reality